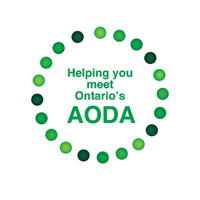 For those of your who are interested in disability law and critical disability studies, it is worth pointing out that the latest round of Accessibility for Ontarians with Disabilities Act (AODA) regulations will be coming into effect on January 1, 2014 (amazingly, less than two weeks away).

AODA regulations are being gradually rolled out on an annual basis until January 1, 2025, having started on January 1, 2012. The standards can be found in the Integrated Accessibility Standards (O. Reg. 191/11), which exhaustively lay out the standards, along with the deadlines for compliance. It also lays out the penalties for non-compliance, which can be as much as $100,000 a day (!!).