Deeds are not accomplished in a few days, or in a few hours. A century is only a spoke in the wheel of everlasting time - Louis Riel

Two years ago, on the 50th anniversary of the assassination of John F. Kennedy, news agencies across the continent were in a flurry publishing memorial articles entitled, “Where were you when JFK was shot?” The phrase has become a commonplace that speaks to the individual experience of a shared national event. On the fateful day when the presidential motorcade passed through Dallas, only a small handful were actually where JFK was, as compared to the millions who learned of the event via radio or television. But no matter how far removed from the situation, each and every contemporary has their own story that places the unforgettable event in the context of their own lives. I was not alive for Kennedy’s term as President, but I can answer different “Where were you when…?” questions in my own way.

I remember returning from recess on the second day of Grade 6 to have my teacher address my class: two planes had just crashed into the World Trade Center in New York, a suspected terrorist attack. I was eleven years old and entirely failed to grasp the significance of the situation, but I could tell from the comportment of the adults around me that something big had happened. After school, I turned on the news for the first time in my life. Ten years later, late on May 2, 2011, I remember sitting in a quiet bar with my friends from university. We had just finished the final exams of our final year, and we’d all be splitting up the very next day to head for home. As we chatted and casually watched sports highlights, one of my friends received a text and asked the bartender to change the channel. President Obama was addressing his nation to let them know that Osama bin Laden was dead. I had an eerie sense of my personal life aligning with the “everlasting wheel of time” to simultaneously mark the end of two eras, one personal, the other global. My presence in that bar with my friends in front of the television is of no relevance to posterity, but I will never forget what I witnessed and what I learned there. Individual experience is important only individually.

These days, the answer to “Where were you when…?” is usually where your eyes first locked on a screen of a television, computer, or smartphone. Before the invention of these technologies, the answer might be where you first heard it via the radio. Before that? It might very well be where you heard cry of the corner paperboy. A book I chanced upon recently in our Special Collections, A Review of the Authorities as to the Repression of Riot or Rebellion, with Special Reference to Criminal or Civil Liability (London, 1868), demonstrates how one Archdeacon Dixon of Guelph, Ontario, answers in his own way “Where were you when…?” and finds an intersection of his life with the epic of national history.

The first reads, “Archdeacon Dixon, Rector of Guelph, May 1884”. The second inscription, in what looks to be the same hand as the first, though with lighter ink and smaller letters, reads “This book was lent by me to Christopher Robinson, my old college friend, to take with him to the trial of Riel, he being crown prosecutor, May 1884. A.D.” 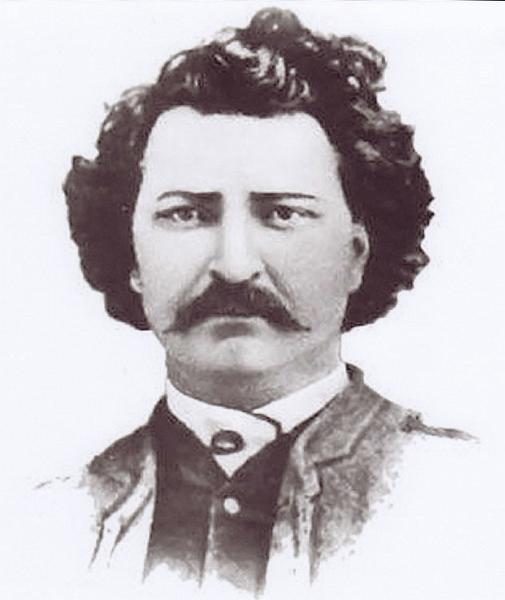 The Trial of Louis Riel (one hundred thirty years ago to the day as of this writing) was a cause célèbre in the young Dominion of Canada, and to see why the Archdeacon Dixon would want to mark his book’s involvement isn’t difficult. After all, Dixon’s dear friend, Christopher Robinson, prosecuted a man who was controversial in his day and who wound up among the most divisive figures in Canadian history. Riel was, depending on who you ask, a folk hero or seditious traitor, and already nationally known for his role in the Red River Rebellion and the killing of Thomas Scott in 1869. He fled to the States, and resurfaced in Canada in 1884 to lead the North-West Rebellion in 1885, for which he was eventually tried and executed later that same year. I imagine that to see a man so prominent in the cultural psyche answer for his deeds years after committing them would resonate for Dixon much in the same way bin Laden’s death resonates for me. As I have my story, the Archdeacon has his, and his book was a part of it; while he left little for later generations to remember him by, he had his brush with history, and that is enough. Can you picture him entertaining guests, taking this book from the shelf and telling his tale? How he might trump up his involvement with the trial so as to seem of greater importance?

Next to an autograph of John A. MacDonald (also accompanied by a note detailing the books historical provenance), this is probably the most fascinating inscription I’ve chanced upon in my short time here at Osgoode, not only for its slight historical connection, but for the Archdeacon’s motivations in writing it. This is what I love about inscriptions, that they are often so personal and intimate, of real importance to the writer but to no one else.

Once I finished musing, I realized something didn’t add up, and that something was the second inscription’s date of May 1884. We can tell, ex post facto, that this date must be an error, since Riel’s trial transpired in July 1885. The Archdeacon could not have written the inscription in 1884 since the information contained within it (i.e. the fact of Riel’s trial; Christopher Robinson’s appointment as crown prosecutor in the case) is contingent upon the events of 1885. By the same logic, since Dixon necessarily wrote the inscription at a point after Riel’s trial in 1885, we must conclude that the date of 1884 was written in error. I think it is likely that the Archdeacon signed only his name in May 1884 as a simple mark of ownership when lending the book to Robinson, and was simply muddled when wrote the later inscription and copied the same date upon the book’s return to him.

Unfortunately, if Robinson employed the book during his preparation for the trial, he did not leave us any markings by which we could trace how he used it. I’d like to add, however, that though he deprived later generations of what would be a remarkable (if minute) insight to the case, Robinson earns top marks for observing proper book-borrower’s protocol, returning the pristine volume to Archdeacon Dixon in the same condition in which it was first lent. Christopher Robinson: a prosecutor and a gentleman. Take note, readers of today -- if you find yourself amidst history in-the-making, pull out your pen and mark the occasion, and do so in a book if one is handy.