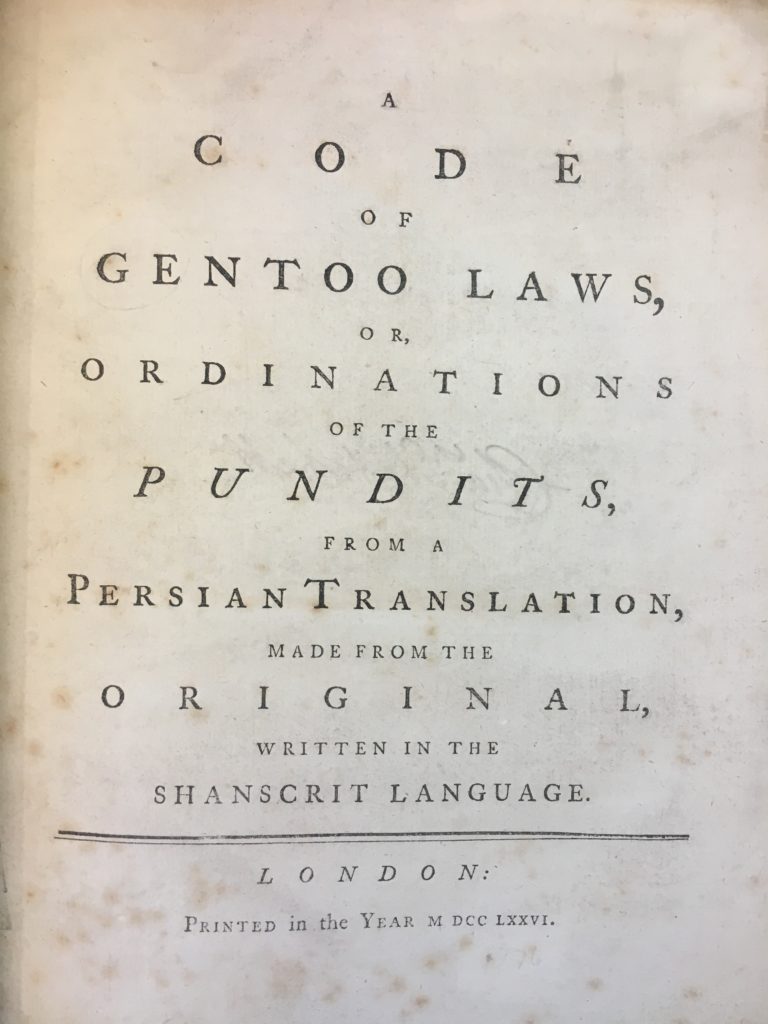 I have now the Satisfaction to transmit to you a complete and corrected Copy of a Translation of the Gentoo Code, executed with great Ability, Diligence, and Fidelity, by Mr. Halhed, from a Persian Version of the original Shanscrit, which was undertaken under the immediate Inspection of the Pundits or Compilers of this Work.” 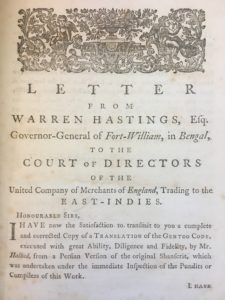 I’ve had another chance encounter with a pair of very curious books, an encounter that served as a reminder that a book is not simply paper, ink and boards, but a collection of ideas and words, beliefs and feelings, all products of the individuals who created them and the age in which they were created.

As I was clearing through a backlog of arcane titles for our special collections, I came upon two books that had earlier caught my eye with their peculiar titles Gentoo Laws. Gentoo? I am no linguist, but this word seemed out of place in our largely Anglo-French collections, almost as if it dropped into our library from some Narnian fantasy land.

Since I am a curious man, I’m not one to allow such an unfamiliar word pass me by unchallenged and unexamined. I quickly finished the task at hand, pulled the books off the shelf and brought them back to my desk for examination. While “Gentoo” (sadly) was not a Narnian term, it was indeed a word with origins remote in both time and place. If I may permit myself to extend the analogy, the word “Gentoo” comes from a land that is to England as Calormen is to Narnia: a far off place where, to use the language of postcolonial discourse, the exotic “other” lived. Pronounced with a soft g, like gentleman, “Gentoo” is an archaic term once employed by Europeans to refer to the native inhabitants of India. Fully titled A Code of Gentoo Laws, or, Ordinations of the Pundits, this book, by the English orientalist and philologist Nathaniel Brassey Halhed, was first printed in London in 1776, when use of the term was evidently common and acceptable in British parlance. The Code of Gentoo Laws is a translation into English from the original Sanskrit by way of Persian – in effect, a translation of a translation. Working under the patronage of the famed Warren Hastings, the first British Governor-General of Bengal, Halhed produced this treatise to illumine to the British the obscure workings of Indian law.

As a translation of a translation, Halhed’s work was deemed a work of poor quality by John Dawson Mayne in his Treatise on Hindu Law and Usage (1st edition, London, 1878), who quotes another authority describing Halhed’s work as “a loose, injudicious, epitome of the original Sanskrit, in which abstract many essential passages are omitted, though several notes of little consequence are interpolated, from a vain idea of elucidating, or improving, the text”. Ouch. Especially in comparison to Mayne’s preferred source, the slightly later and considerably more learned Digest of Hundu Law (Calcutta, 1797), Henry Thomas Colebrooke’s considerably more learned translation of the Vivada Bhangarnava, Halhed’s work had little impact. Nevertheless, in 1776, it was important as the first such attempt to codify Hindu law in English, and was followed five years later by a second edition (London, 1781), which Osgoode also holds. 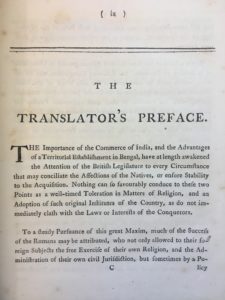 Although The Code of Gentoo Laws undoubtedly broke new ground, the motivations driving its production can be, from our historical perspective, troubling. Halhed’s “Translator’s Preface” says all we need to know:

“The Importance of the Commerce of India, and the Advantages of a Territorial Establishment in Bengal, have at length awakened the Attention of the British Legislature to every Circumstance that may conciliate the Affections of the Natives, or ensure Stability to the Acquisition. Nothing can so favourably conduce to these two Points as a well-timed Toleration in Matters of Religion, and an Adoption of such original Institutes of the Country, as do not immediately clash with the Laws or Interests of the Conquerors.

To a steady Pursuance of this great Maxim, much of the Success of the Romans may be attributed, who not only allowed to their foreign Subjects the free Exercise of their own Religion, and the Administration of their own civil Jurisdiction, but sometimes by a Policy still more flattering, even naturalized such Parts of the Mythology of the conquered, as were in any respect compatible with their own System.

With a View to the same political Advantages, and in Observance of so striking an Example, the following Compilation was set on foot; which must be considered as the only Work of the Kind, wherein the genuine Principles of the Gentoo Jurisprudence are made public, with the Sanction of their most respectable Pundits (or Lawyers) and which offers and complete Confutation of the Belief too common in Europe, that the Hindoos have no written laws whatever, but such as relate to the ceremonious Peculiarities of their Superstition.”

Halhed’s petitions for religious tolerance and the use of the native legal system are admirable; less so are the presentation of his ideas and the motivations behind them. Halhed advises the British to emulate their imperial heroes, the Romans, by employing tactics of self-interested soft power (in this case the allowance of certain freedoms) – but only insofar as they are beneficial and not contrary to the colonial project of the East India Company and Britain. Halhed isn't merely a theorist; he admits he undertook this work with the aim of actively supporting the amiable conquest he proposes. CUNY professor Siraj Ahmed addresses the issue in his article “Notes from Babel: Toward a Colonial History of Comparative Literature” (Critical Inquiry 39 (2): 296-326, (Winter 2013)), where he states that works such as Halhed’s Code “enabled the colonial state to claim knowledge about Indian history and present itself as an extension of native sovereignty,” and therefore “philology had been apprenticed to colonial rule.”

For his part, it must be said that Halhed did have an avowed personal philological interest in his project, as he spends a considerable amount of the text discussing linguistic challenges and other pertinent topics, and includes fascinating plates exemplifying the Sanskrit language in its original script. 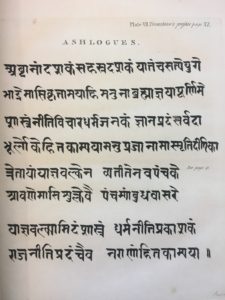 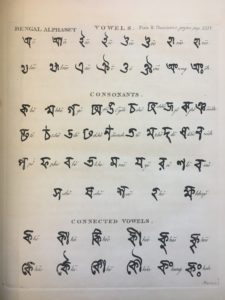 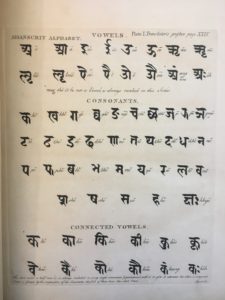 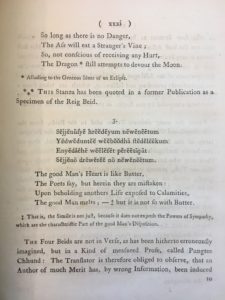 In his Code, Halhed includes a bibliography of Indian law books, the “names of the Hindoo months,” and a glossary of “Shascrit [sic], Persian, and Bengal words”. And Halhed did work with “Bramins” expert in their native law – all of whom are named – to render into Persian the Sanskrit originals they produced. Halhed is generous to state that these Bramins were indeed the labourers who compiled and created the intellectual content of the work in hand, while he was merely the translator. Though the claim is generous, experts see it as factually implausible. Encouraged by this project, Halhed went on to publish A Grammar of the Bengal Language. 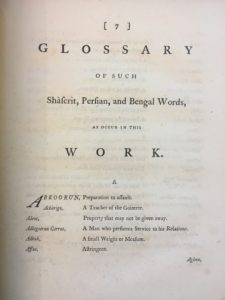 I attempt neither to condemn nor condone Mr Halhed and his work; nor do I wish to misrepresent anything in which I am not expert. I have had but a short time to investigate this text and don’t pretend to criticize the enterprise from a moral high-ground 200 years after it was written. I say all this only to describe the political and imperial thrust of the text. Without its preface, the book might pass simply as an exercise in translation or a genuine attempt to understand the endemic culture of India, but the context in which it was published negates this possibility. The Code of Gentoo Laws remains an artifact of its era: an almost synecdochic item in that it, as a single object, represents a time, place, worldview, enterprise, condition, and Empire. Though once a process of history, it is now, thankfully, only a piece of it.