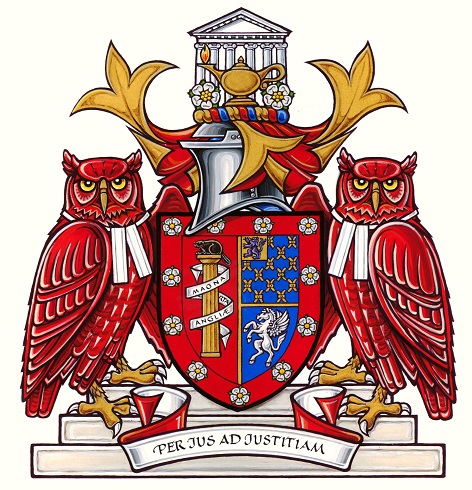 Over the past few years, the Library has been closely involved in working with the Canadian Heraldic Authority in Rideau Hall on the design of a new coat of arms for Osgoode to reflect the law school’s association with York University and in celebration of our 50th anniversary at York. That task is now complete. The new coat of arms features a border with white roses surrounding the familiar shield from our old coat of arms (which is otherwise unchanged) and the addition of “supporters” – two red owls, complete with barrister’s tabs, to hold it up. The heralds at the Heraldic Authority tell me that, as far as they know, these are the only red owl supporters in all of heraldry. The owls are an appropriate addition to the Osgoode arms because, from the founding of the school in 1889, students have been calling their teams "The Osgoode Owls".

The full blazon (description) and symbolism of the coat of arms can be read in the Canadian Heraldic Authority’s official Register of Arms, Flags and Badges.

The white roses in the new coat of arms represent the “white rose of York”, a symbol that also appears in the coats of arms of York University and the City of Toronto (known as York until 1834). The classical portico in the “crest” at the top of the arms is, of course, one of the side porticos of “old Osgoode Hall” on Queen Street in the heart of downtown Toronto, home of Law Society of Upper Canada and the Court of of Appeal of Ontario, and of Osgoode Hall Law School from its founding in 1889 until it’s move to York University in 1969. 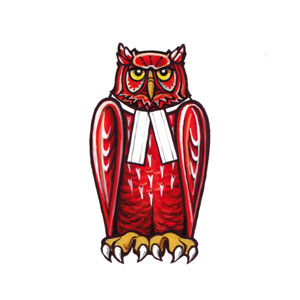 One of my favourite things about heraldry is the archaic, almost secret language used to describe heraldic devices. It's a funny carry-over from Anglo-Norman-French, similar in many ways to Law French. As an example, here's the official description of the Osgoode badge in heraldic terms:

An owl affronty Gules (ie, a red owl facing forward) beaked and legged Or (ie, with gold beak and legs) gorged with barrister’s bands Argent (ie, with white barrister's band around its neck)

How can you not love the Osgoode owl affronty?