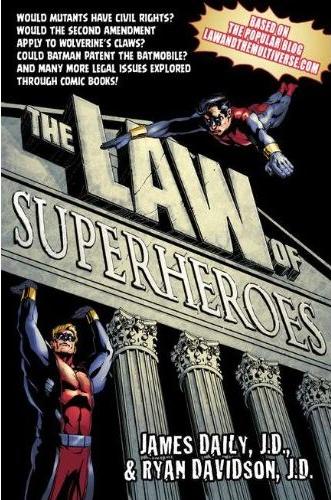 a single case!), it is always refreshing to read legal writing where the author is clearly enjoying the material. If you learn something - even better!

In December 2010, I read about a novel new legal blog in the New York Times called Law and the Multiverse. It has since taken off, with a newly-published book to show for it (alas, it is not yet in the library collection).

A clear example of the aforementioned style of legal writing, it is written by two American lawyers, James Daily and Ryan Davidson, who also happen to be enormous comic book nerds. The premise of the blog is simultaneously extremely simple and extremely clever:

What would happen if real laws applied to the denizens of the comic book multiverse?

So if you ever wondered what would happen if you were convicted of murder and the victim came back to life, if Superman's heat vision is a weapon, or if evidence collected by Batman could be used by Commissioner Gordon to convict somebody in court, then this is the blog for you.

Although the subject matter is all American-oriented, it is nevertheless extremely entertaining to read about the application of various laws to altogether implausible scenarios. While the premise was initially focused on comic books, it has since expanded to other mediums, with Looper as a recent two-part focus. It is easy to get lost in the archived posts, which are uniformly well-written and straight-faced.