“Here begins the treatise on the laws and customs of the realm of England, composed in the time of King Henry the Second when justice was under the direction of the illustrious Rannulf Glanvill, the most learned of that time in the law and ancient customs of the realm.

Not only must royal power be furnished with arms against rebels and nations which rise up against the king and the realm, but it is also fitting that it should be adorned with laws  for the governance of subject and peaceful peoples...” - Prologue, Glanvill’s Tractatus de Legibus et Consuetudinibus Regni Anglie (trans. GDG Hall)

Anyone who works with aged items is given to thinking, every now and then, that they (be they librarian, curator, researcher, etc.) are a little bit like Indiana Jones. That's why they got into the business, right? Every quotidian object is to them an "artefact" or "relic", and they daily expect a little note to fall out of a book that will dash them off on a swashbuckling adventure through the Levant. And, the worst of these delusions, they probably think they're as rugged and robust as Harrison Ford. Well... I can dream can't I?

While these whip-snapping, snake-hating exploits are purely the stuff of cinema, I've found that one silver screen principle holds true: like the Holy Grail in Prof Jones’ Last Crusade,, sometimes the most amazing things come in the most unassuming packages. Take, for instance, our recently-acquired first edition (1554) of Glanvill’s Tractatus de legibus et consuetudinibus regni Angliae (Treatise on the Laws and Customs of the Kingdom of England).

The work, completed ca 1188, in the reign of Henry II, is generally considered to be the earliest treatise on the English common law. The first print edition was published in London by Richard Tottel in 1554, and we also have a rather nice copy of the 1780 third edition (which was called the "best edition" by William Thomas Lowndes in his great Bibliographer’s Manual of English Literature). Two of quite a series of editions.

Our 1554 first printed edition is a surprisingly small octavo (8vo) and rather unassuming. 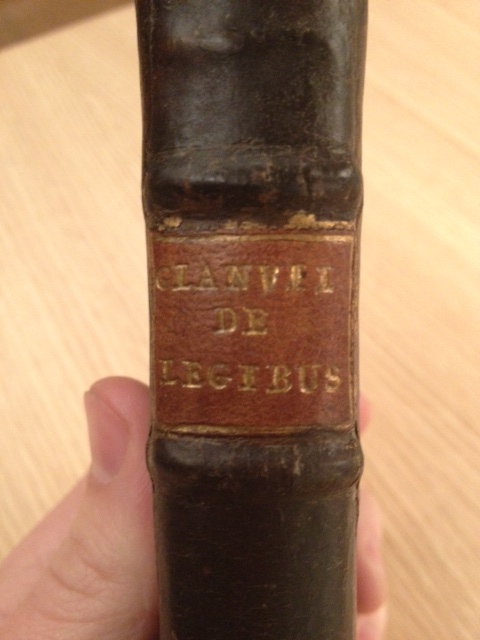 Our copy has an original early, contemporary leather binding, recently rebacked, with a blind-stamped and sadly illegible coat of arms on the front. 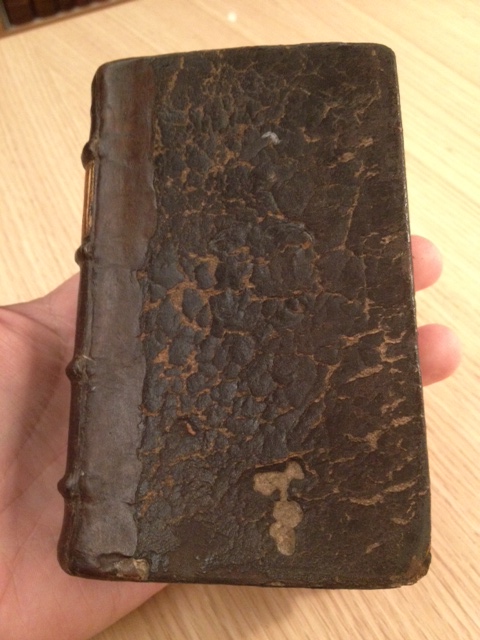 Our copy is the only copy of this work in Canada and one of only 9 documented copies in North American libraries.The book is rare and valuable enough that we have provided it with its own form-fitted box, a sort-of VIP booth of the book club. Very exclusive. Very posh.

Our copy has exceptionally wide margins and some annotations on the title page and throughout the text.

According to GDG Hall in his translation of the work, Glanvill's Tractacus may not actually have been written by Glanvill, but his name is invoked in the tract’s incipit (which may not be original), it was written during Glanvill’s tenure as Chief Justiciar of England during the reign of Henry II, and the work has been called Glanvill since the 13th century; so it is customarily referred to by his name instead of its more plentiful title.

Glanvill, like Coke on Littleton, is an important “book of authority”. Though the exact definition of this phrase is difficult to pin down, these texts may be considered guiding lights in the law, and modern courts consider them to have the same authority as a case of the same period in which it was written . Glanvill is of note among these books of authority as the very first of them; in fact, it has the added distinction of being the first ever detailed exposition of the English Common Law, as noted by Sarah Tullis in her excellent essay “Glanvill after Glanvill: The Afterlife of a Medieval Legal Treatise”. As an added distinction, we’re pleased to note that this significant work in our collection is the only copy in Canada.

The first of anything often seems like a revolution, and that’s precisely the term English legal scholar Edward Jenks chooses to describe what Glanvill did to the administration of justice in England. Tullis too characterizes the appearance of Glanvill as a revolution, citing the “explosion of legal thinking and precedents” that appeared in its wake. Glanvill was particularly useful because it introduced writs. Issued in the name of the sovereign, these formal orders compelled the parties to do or refrain from some specified act. As Tullis notes, however, “Glanvill’s practical functionality . . . was at once its greatest strength and weakness”, and this same explosion of legal thought soon overwhelmed its source and Glanvill lost its position as the pre-eminent English law text. Magna Carta appeared about 25 years later in 1215, and Bracton’s De legibus et consuetudinibus Angliae about 20 years after that.

Under these circumstances, Tullis imagines that such a text as Glanvill should have been quickly forgotten and relegated to the status of a quaintly curious artefact early on in its history, but this was not the case. Instead, the book achieved a status that was quite the opposite: authority. Glanvill was continuously copied in manuscript form for decades after its appearance in the 1180s, even when it was clearly superseded by more recent and advanced law. “Ironically,” notes Tullis, for a time “Glanvill was cited with ever-increasing frequency in court as the law it contained became ever more obsolete.” By the 14th century, Glanvill ceased to be copied, but what manuscripts still existed were still highly valued.

The treatise was first printed in 1554. Though by this time Glanvill had largely fallen out of use, it may have remained an obscurity were it not for the efforts of another prominent English jurist, Sir Edward Coke. The “earliest reported citations [to Glanvill] after printing all occurred in Sir Edward Coke’s Reports . . . dating from 1587 [to] 1615.” For Tullis, “the importance of the treatise’s first printing cannot be overstated... [for] it was undoubtedly at this point that the text’s status as a legal classic was first publicly cemented.” Coke’s use of the treatise sparked a renewed interest in it, and Glanvill has since been cited in the English court as recently as 1992.

Perhaps we can think of Glanvill today as an authority emeritus. For its period it remains the definitive text, but today it can rest easy in retirement relieved of its burdensome duties and  knowing that we’ll only need to consult it every now and then. Of course, a real appreciation is best left to the expert, so as Tullis concludes, Glanvill’s

“general scope and elements of the speculative within the strict parameters of concise procedural practicality therefore enabled it to remain useful or at least worth referencing long after it might have been entirely superseded or rendered merely a historical curiosity. Even if the Common Law itself moved in some respects away from Glanvill, and the scheme of justice it represented, it is clear that it would be wrong to see the treatise’s life as coming to an end either with the dissemination of Bracton, or with the production of its last manuscript copies or indeed with the end of the Middle Ages; instead, Glanvill lived on long after Glanvill.”