“JOHN, by the grace of God King of England, Lord of Ireland, Duke of Normandy and Aquitaine, and Count of Anjou, to his archbishops, bishops, abbots, earls, barons, justices, foresters, sheriffs, stewards, servants, and to all his officials and loyal subjects, Greeting.”

In 2015, such an aureate introduction won’t even fit in a tweet. But in 1215, a full eight centuries past, politicians and leaders were not constrained by 140-character limits when they wanted to make a proclamation. King John knew he had ample space on his luxuriously vacant vellum for a loquacious lead-in, and by Jove, he was going to use it.

As John Allemang’s recent (Feb 2) excellent spread in The Globe and Mail reminds us, this year we are celebrating the 800th anniversary of the truly remarkable Magna Carta. In his thoughtful piece, Allemang roundly considers arguments from both Magna Carta’s devotees and detractors, noting that, for all the praise given it for establishing the rule of law and basic tenets of human rights, “sometimes, it is just a self-interested legal document that attempts to settle a bunch of long-simmering quarrels between one very powerful man and a few almost-as-powerful men.” However you choose to view the Magna Carta at 800, for Allemang, its “statement of principle is good enough: Don’t let the bullies push you around.” But enough with the sound-bites; please, read on at The Globe and Mail: Part I and Part II.

As everyone should know, the Magna Carta -- also known as the Great Charter -- was signed by King John in the presence of his barons at the field of Runnymede near Windsor on June 15, 1215. There are four extant copies of the Magna Carta: two at the British Library and one each at Salisbury and Lincoln cathedrals. During this octocentenary year, all four copies will be on display at the British Library, which is also hosting an exhibition, “Magna Carta: Law, Liberty, Legacy”, from March to September this year. If you find you’re too busy with law school to take a trip to England (an understandable excuse), you can view the exhibition online.

Also as part of this year's celebrations, a copies of the Magna Carta will be sent on tour around the world. A copy of the Magna Carta from Durham Catheral -- a "reissue" from 1216, accompanied by Durham's 1225 copy of the companion Charter of the Forest -- will be on exhibit in Canada from June through December, making stops in four Canadian cities (Ottawa, Toronto, Winnipeg and Edmonton). Toronto's Fort York, will be host from October 4 to November 7, 2015. For more information, visit the Magna Carta 800 Canada website. 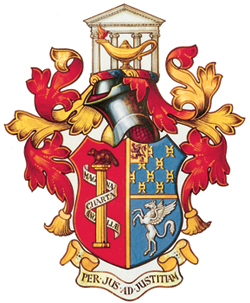 The Magna Carta is also features on the coat of arms of Osgoode Hall Law School. On the left side of the shield is portrayed a Doric column surmounted by a crouching beaver. Around the column is a white scroll with the words "Magna Carta Angliae" (Great Charter of England). The beaver, of course, represents Canada. The column and scroll indicate that law, the rule of law and civil rights, descending from Magna Carta, are a pillar of Canadian society. These symbols -- the pillar, the beaver and the scroll -- are taken directly from the Seal of the Law Society of Upper Canada in Osgoode Hall, the School's home until 1969.

If you'd like to learn a little more about the Great Charter, a quick search through our holdings reveals numbers of texts and commentaries regarding the eminent document. Our collection includes Blackstone's famous treatise of 1759.