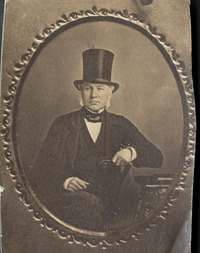 In several separate purchases over the past year, the Osgoode Library has managed to acquire a collection of law books, the Jarvis-Irving Collection, comprising 32 titles (67 volumes) that belonged to Samuel Peters Jarvis (1792-1857), a lawyer and prominent Toronto citizen and member of the Family Compact in Upper Canada.

Jarvis was born in Newark (now Niagara-on-the-Lake) in 1792, when it was the capital of the colony of Upper Canada. His father, William Jarvis, enjoyed the patronage of Lieutenant Governor John Graves Simcoe, who granted him the offices of provincial secretary and registrar. Samuel Jarvis was educated at Reverend  John Strachan's Grammar School in Cornwall, after which he took up legal studies in the office of Attorney General William Firth. His articles were interrupted by the War of 1812, in which he saw considerable action, including service with Major-General Sir Isaac Brock at the capture of Detroit and at the Battle of Queenston Heights. He was called to Bar in 1815.

Though from an established family and well-positioned for success, Jarvis's fiery temperament and impetuous nature initially thwarted his chances at preferment. In 1817, he killed John Ridout, son of Surveyor General Thomas Ridout, in a duel, though he was later exonerated. In 1826, with a group of other Tory young bloods, he invaded and ransacked the offices of William Lyon Mackenzie, an offence for which he was heavily fined. Despite these blots on his character, Jarvis was appointed deputy provincial secretary and registrar by Lieutenant Governor Sir Peregrine Maitland in 1827, and subsequently Chief Superintendent of Indian Affairs by Lieutenant Governor Sir Francis Bond Head in 1837. Jarvis did not prove a great success in either of these roles. After several investigations into mismanagement, the office of Chief Superintendent was abolished in in 1845 and Jarvis, in disgrace, retired to private life. Faced with financial problems, he subdivided and sold off most of the 100-acre park east of Yonge Street in Toronto that he had inherited from his father. In 1847, Hazelburn, the house he had built there 23 years earlier, was torn town to make way for for the street which still bears Jarvis's name. Jarvis died in 1857.

This collection is called the Jarvis-Irving Collection, as it was subsequently passed on to Jarvis’s daughter-in-law’s brother, Sir Aemilius Irving (1823-1913), the longest-serving Treasurer of the Law Society of Upper Canada. We are extremely proud of this collection, as it is rare to be able to rebuild such a substantial collection of law books from so early a period in our national and legal history.