The Osgoode Library recently acquired for its Trials special collection in the Canada Law Book Rare Room copies of the following publication:

Life and Confession of Sophia Hamilton Who Was Tried, Condemned and Sentenced to be Hung at [name of city] for the Perpetration of the Most Shocking Murders and Daring Robberies Perhaps Recorded in the Annals of Crime / Carefully Selected by the Author, William H. Jackson. Printed for the Publisher, 1845. 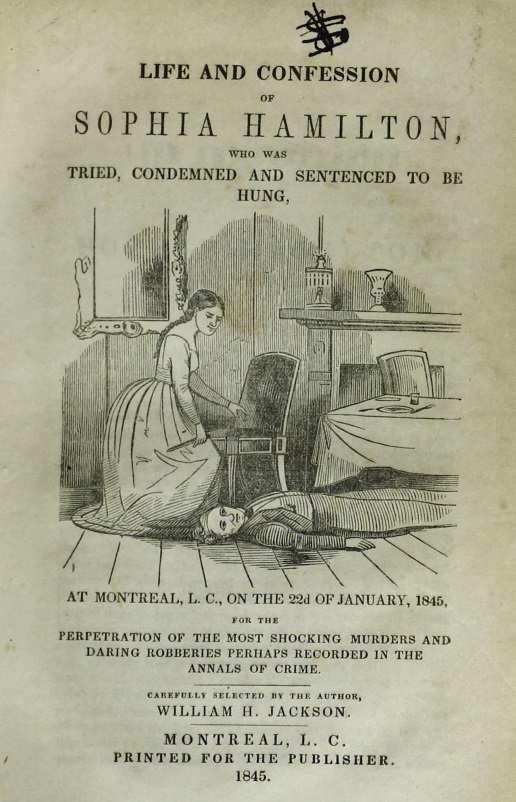 This is a most interesting and confusing little publication. Here at Osgoode we were fortunate to obtain copies of both extant Canadian editions of this work, one published in Montreal and the other in Fredericton, both in 1845. Both editions are rare, especially the Fredericton edition. More interesting, however, is the fact that the person and crimes described in both editions are completely bogus and fictional. In the Montreal edition, the evil Sophia owned and operated out of a cottage tavern located in La Prairie, “a neat village about nine miles south of Montreal”, where she fleeced and murdered some of her more affluent guests, as well as a few witnesses to her crimes, for which she was tried and hung in Montreal on 22 January 1845. The Fredericton edition claims that her inn was located in Woodstock, New Brunswick, while she was tried, condemned and executed for her avaricious thefts and 10 murders in Fredericton on 8 April 1845. Other than these details, the text (though not the typsetting) of both editions is identical.

An article from the University of New Brunswick Faculty of Arts alerts readers to the fact that Sophia Hamilton is in fact a fictional character, but misses the bibliographical interest that her fictional misdeeds were recorded in two different cities in two separate imprints.

The earliest edition of this work, however, seems to have been printed in New York. A dgitized copy, from the Cornell University Library, can be viewed here. In this edition, Sophia was hung in Montreal on the 25th of November, 1844, two months before the Montreal edition saw her go. The illustration on the title-page is also different from the Montreal and Fredericton editions. The title-page illustration in the Canadian editions shows Sophia with one of her murdered victims lying on the floor, while the New York edition shows her in the act of making her confession. This latter illustration is rendered further in the text in the Canadian editions. (The image above is from the Osgoode copy of the Montreal edition.)

The Catalogue of Law Trials [from] the Collection of the late E.B. Wynn, of Watertown, N.Y. [To be sold at auction] February 7th to 11th, 1893 (New York, 1892), which can be viewed on the Hathi Trust here, records copies of both the Montreal and Fredericton (but not the New York) editions of the work. This catalogue claims that Sophia committed her crimes in Fredericton but was tried, condemned and hung in Montreal. Wrong again!